Orange County Board of Supervisors adopted a resolution honoring Pacific Symphony as Orange County’s “Global Arts Ambassador” reflecting the success of Pacific Symphony’s historic tours to China, Europe, and a sold-out Carnegie Hall performance, as well as its national television debut on PBS Great Performances. It also reflects the Symphony’s strategic goal of celebrating world cultures representing the extraordinary diversity of Orange County. For example, the Symphony will be presenting a celebration of the Iranian New Year tradition of Nowruz, a Lunar New Year celebration, and a free, day-long Lantern Festival. In 2018-19 it also presented the “Defiant Requiem,” a commemoration of the Holocaust and the 100th Anniversary of the founding of Czechoslovakia.

With each of these celebrations, Symphony President John Forsyte commented,

The Pacific Symphony family was the first to hear the news when Michelle Steel, Vice Chair, Second District Supervisor, took center-stage at the beginning of Pacific Symphony’s Thursday, Oct. 17 concert to present the official proclamation to Music Director Carl St.Clair and President and CEO John Forsyte. The audience applauded enthusiastically.

The formal presentation of the proclamation took place the following Tuesday, Oct. 22 at The Hall of Administration in Santa Ana’s Civic Center at the beginning of the bi-weekly Board of Supervisors meeting. Vice Chair Michelle Steel read aloud the proclamation’s final resolution:

“The Orange County Board of Supervisors takes great pleasure in honoring Pacific Symphony for its commitment to artistic excellence, exceptional music performances and education and community programming; and recognizes Pacific Symphony’s significant contribution to the quality of life in Orange County, as well as its national and international reputation; and hereby proudly designates Pacific Symphony as “Orange County’s Arts Ambassador to the World.”

Vice Chair Steel described herself as a recovering cellist, commenting on how important musical training has been in her life, and how important such training is for children. She expressed in her own words,

“It is a pleasure to designate Pacific Symphony as ‘Orange County’s Arts Ambassador to the World.’ For many years now Pacific Symphony has played a vital role in the county, and showcased their commitment to great music around the world. I am so very proud to have them in my District.”

“It’s deeply moving for the Pacific Symphony family to be recognized by the Board of Supervisors. I want to thank Michelle Steel for initiating this honor. It’s Carl St.Clair’s 30th anniversary, making him the longest-tenured music director of a major America orchestra. In the past 60 years, only one orchestra has been elevated to ‘Tier One’ status (the largest and most accomplished orchestras) by the League of American Orchestras, and that’s your Pacific Symphony.”

A large copy of the proclamation can be viewed at Pacific Symphony concerts in the lobby of the Renée and Henry Segerstrom Concert Hall. 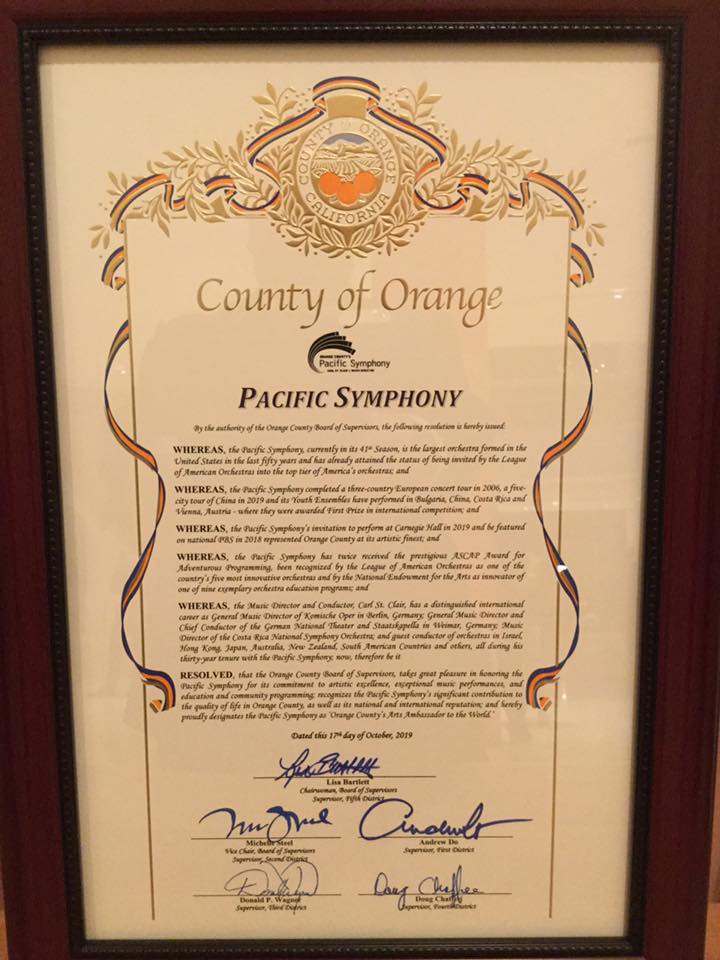