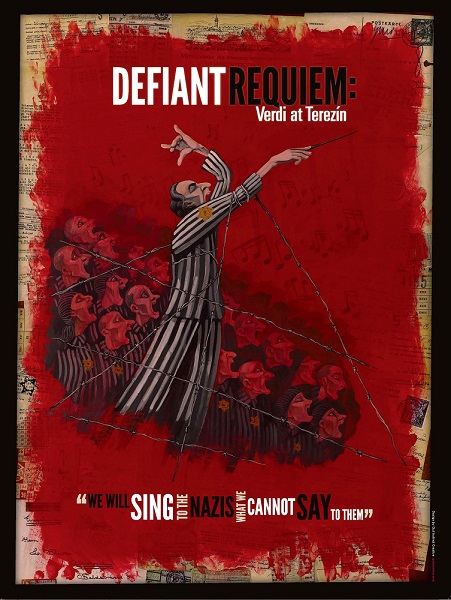 Over the past 150 years there have been many significant presentations of Verdi’s Requiem, but none was more powerful than the performances given by prisoners in the Terezín concentration camp (Theresienstadt) during World War II. These courageous men and women faced starvation, abuse, and imminent death, yet they defied the Nazis by performing this towering masterpiece. With only a single smuggled score, they performed the famous oratorio sixteen times, including one performance before senior SS officials from Berlin and an International Red Cross delegation. Conductor Rafael Schächter – who brought his fellow prisoners together and led the performances – told the choir, “We will sing to the Nazis what we cannot say to them.”

This extraordinary and little-known story is commemorated in Defiant Requiem: Verdi at Terezin, which will be performed at the Renée and Henry Segerstrom Concert Hall on April 16, 2019. This powerful program will be generously sponsored by the Jewish Federation and Family Services, made possible by the Albert Weissman and Rhoda Yvette Weissman Estate.

Defiant Requiem combines the complete Verdi Requiem, with video testimony from survivors of the original Terezín chorus, and footage from a Nazi propaganda film made in Theresienstadt. The performance also includes actors who speak the words of imprisoned conductor Rafael Schächter and others. This “concert-drama” was conceived and created by noted conductor and educator, Murry Sidlin, who will lead the Pacific Symphony, Pacific Chorale, and an international cast of renowned soloists in this special performance. Defiant Requiem is not just another performance of the Verdi Requiem, but a tribute to the inspired leadership of Rafael Schächter who was forced to reconstitute the choir three times as members were transported to Auschwitz. The performances came to symbolize resistance and defiance and demonstrated the prisoners’ courage to confront the worst of mankind with the best of mankind.

“Nothing shall remain unavenged.”
~ from “Dies Irae” of the Messa da Requiem,
the Catholic Mass for the Dead

The concert’s origins can be traced to the mid-1990’s, when Maestro Sidlin happened upon a book in a used bookstore in Minneapolis, entitled Music in Terezín, 1941–1945 by Joža Karas. Intrigued by the title, Sidlin thumbed through the book and opened to a section about a man named Rafael Schächter. There were a few sentences about how Schächter was deported to Terezín and, while there, recruited a chorus of 150 prisoners, taught them Verdi’s Requiem by rote, and presented 16 performances of this ambitious work.

Soon after purchasing the book Sidlin began to ask himself a nagging question: why would a large group of Jews, imprisoned for being Jewish, willingly volunteer to learn, rehearse, and perform such a demanding choral work that was deeply steeped in the Catholic liturgy? With little new information available he became more and more convinced there was another reason that this chorus of prisoners, all amateur singers, undertook performing the Verdi. The endeavor was either foolish or staggeringly brave. Either way, he knew there had to be a deeper explanation for Schächter’s dedication.

A few years later, Sidlin miraculously located some of the prisoners who sang in those performances, including Edgar Krasa (1924-2017), who not only sang in the Verdi chorus, but was also Schächter’s roommate in the concentration camp barracks. Edgar and his late wife Hana went on to introduce Maestro Sidlin to other surviving members of the chorus: Marianka Zadikow-May and Eva Rocek, and audience member Vera Schiff. These former prisoners helped fill in the missing details, and the answers to Sidlin’s questions and the motivations behind the performances were confirmed – this was a remarkable act of resistance.

As part of the process, Edgar Krasa, Marianka Zadikow-May, Eva Rocek and Vera Schiff recounted their experiences and emotions, and gave videotaped interviews so the world would know their first-hand account of what took place all those years ago. Portions of these videos form an integral part of Defiant Requiem, and the Pacific Symphony audience will see these survivors on screen at the performance on April 16.

Since its debut in 2002, Defiant Requiem has been performed nearly fifty times worldwide and more than 65,000 audience members and performers have experienced the Defiant Requiem story. The performance and its message of how human beings retained their dignity, sustained their spirits, and resisted oppression through the redemptive power of music is universal. Howard Reich, in the Chicago Tribune, wrote, “Never again will I hear Verdi’s Requiem without thinking of this performance, and what happened in Terezín.”

You can learn more about the concert, or purchase tickets, on our website here.

GAIL WEIN is a New York-based music journalist who has written for The Washington Post, Playbill and Symphony Magazine, and was producer of National Public Radio’s Performance Today.