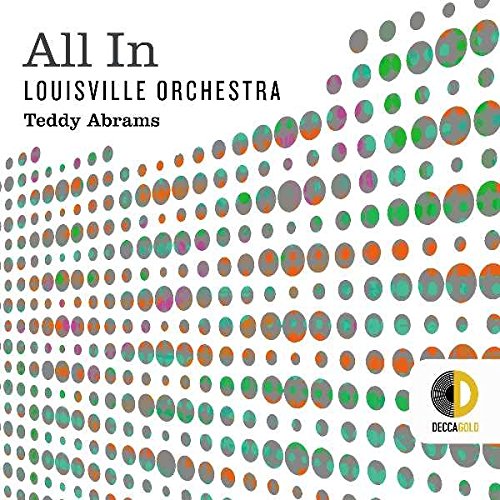 Teddy Abrams is the 30-year-old music director of the venerable Louisville Orchestra and he’s at least a quadruple threat: Conductor, composer, clarinetist and pianist. The young man, a protege of Michael Tilson Thomas, is stirring things up with the orchestra and their first album together, dubbed “All In” and released on Decca Gold on Sept. 22, reached No. 1 on Billboard’s Traditional Classical Chart in its first week. (Obiter dictum: These days, that doesn’t necessarily mean huge sales.) “All In” is the orchestra’s first album in nearly 30 years. Abrams appears as conductor, composer and clarinetist on it.

At one time, some will remember, the Louisville Orchestra was one of the most recorded in the world. In the late 1940s the ensemble launched the Louisville Orchestra Commissioning Project, funded by both local arts money and Rockefeller Foundation grants. The Project eventually yielded hundreds of new works for orchestra as well some 150 recordings of them (on the orchestra’s own label, First Edition Records). Abrams and the orchestra hope “to pick up and expand this legacy,” the liner notes say. Good luck to them.

The disc opens with Abrams’ own “Unified Field,” a shortish four movement work in an accessible, popular and diverse style. In the liner notes, Abrams offers this: “My own music reflects my favorite musical experiences and memories, ranging from an obsession with ‘classical’ contrapuntal technique to the unmatched energy of playing a rock show and the joy of jamming with great Bluegrass artists. Usually these worlds do not find much common ground, but ‘Unified Field’ is an attempt to join everything I love into a single expression across multiple genres.”

The result is pleasant enough, light, too, but bordering on hackneyed. The first movement is pretty, oceanic movie music; its main theme returns in the other movements. The second movement romps in a percussive groove, complete with electric bass and electric guitar. A drum set and Hammond-style organ are added to the processional third movement (a kissing cousin to the “Pilgrims’ March” in Berlioz’s “Harold in Italy”), and the finale is a comedic jamboree on a country fiddling tune.

Surprisingly perhaps, the piece is played none too well here, rather sloppily most of the way, the strings sounding overtaxed and the musicians just not moving as one.

Perhaps it won’t matter to many listeners that the next three numbers aren’t remotely classical, but they do seem out of place here. The vocalist Storm Large, of Pink Martini fame, joins the orchestra for three songs in jazzy style, a pair of ballads, “A Woman’s Heart” by Large and “The Long Goodbye” by Abrams, and an uptempo “It’s Alright with Me” by Cole Porter. A gifted stylist, Large rather overdoes it in this case, pressing and preening. The arrangement of the Porter tune, credited partly to Large, is poor — it never quite gels. (Compare Ella Fitzgerald’s version.)

Which leaves the finale, Copland’s Clarinet Concerto, with Abrams as soloist. (Someone named Jason Seber conducts it, but we are never told who he is.) Written in 1948 for Benny Goodman, the concerto mixes the composer’s familiar American style with Stravinskian neoclassicism and jazz. Abrams negotiates the high-flying solo part sensitively and athletically but the intonation is not always perfectly centered. Seber and the orchestra give him nimble enough support. But it’s too little, too late.

How to be a philanthropist 101: Charlie Zhang