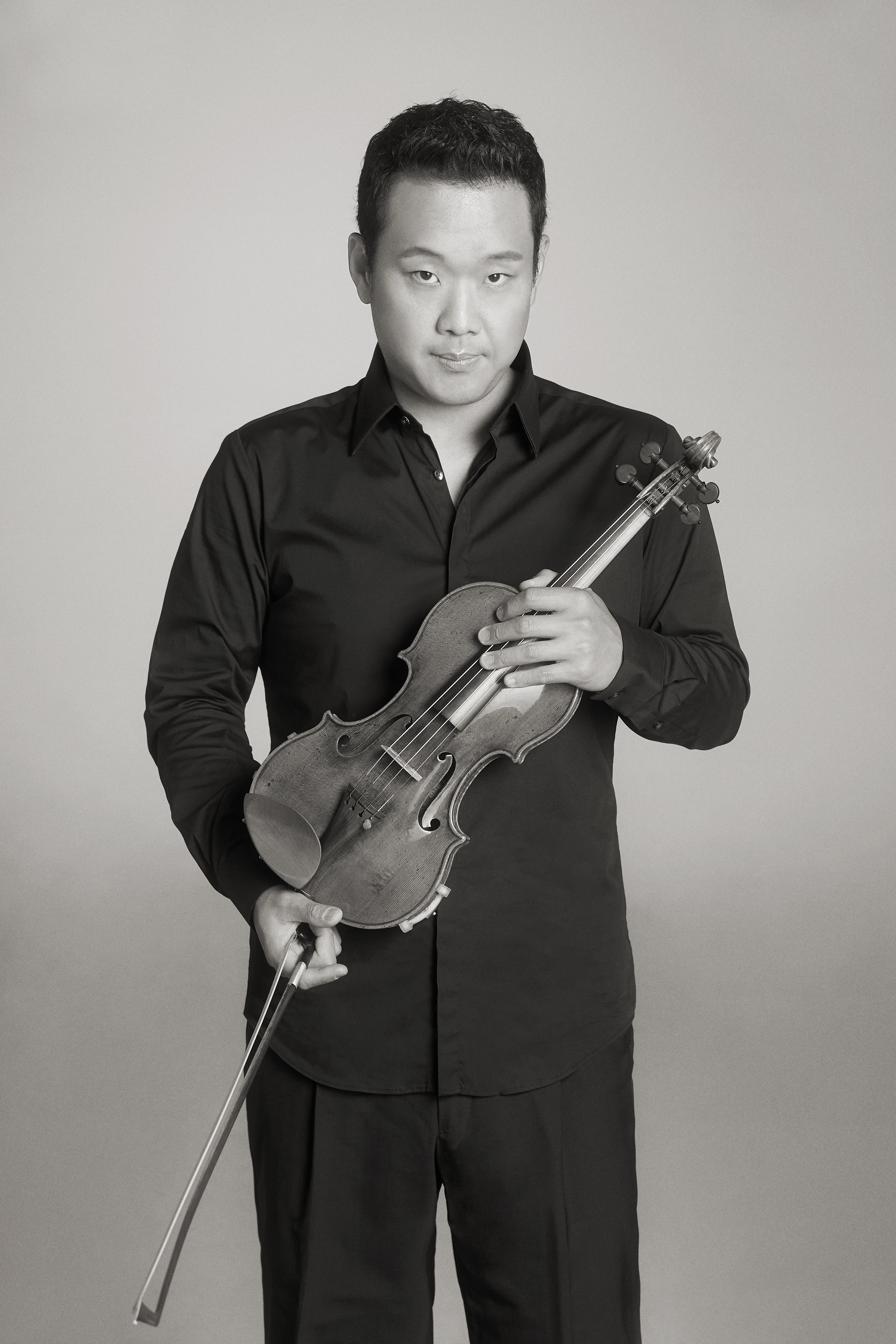 Dennis Kim is the new concertmaster of Pacific Symphony, named in April to the position after a long search, replacing Raymond Kobler, who retired in 2016 after 17 years with the orchestra. Kim just moved to Irvine the other day, but already looked like a local as he waited for a reporter to arrive: athletic shorts, a logo T-shirt and neon-colored running shoes. Sitting on a bench outside a coffee and bagels place, he was checking his cell phone, just like natives everywhere. The only thing that gave him away as a foreigner was the logo on the shirt. It belonged to the Toronto Blue Jays.

Born in Korea, Kim moved to Toronto when he was three months old, grew up and learned to play the violin there. He’s moved here from Buffalo, where he served as concertmaster of the Buffalo Philharmonic for the last three years and drove regularly to Toronto (90 minutes away) to teach there at the Royal Conservatory of Music, his alma mater. He starts his new job in September. You’ll see him in the first chair for the annual Tchaikovsky Spectacular on Sept. 8, at Pacific Amphitheatre, and then at the opening concerts of the indoor season Sept. 27-29, at Segerstrom Concert Hall. In the latter concerts, the audience will get to hear Kim as a soloist in Mozart’s Sinfonia Concertante, K. 364.

He’s excited to be in California, a state he had only visited briefly before.

“Oh, absolutely,” he said. “For my kids, they’re in shock that the food here, it’s just like Korea.” His two girls came home from their first day of school in Irvine with the unbelievable news that all the other kids had seaweed in their lunches. “I guess if we were coming from Korea to here it wouldn’t have been that big of a shock, but going from Korea to Finland (where Kim was concertmaster of the Tampere Philharmonic) and then to Buffalo and then to here just the variety and the options are incredible for the kids. My wife loves the weather.”

Among Kim’s many calling cards is his violin, a Stradivarius from 1701 once owned and played by Samuel Dushkin. Kim says he’s always asked about it, but seemed happy enough to discuss the instrument anyway.

Dushkin, of course, was a friend and performing partner of Igor Stravinsky, and much of the composer’s violin music was given first performances on the instrument.

“It’s an incredible violin,” Kim said. “There are a few times, like in the Ein Heldenleben solos, where you need to cut through the orchestra a little bit, and I feel like this instrument has that power. Even when everyone is playing full out, I can play just that much above.” Its soft dynamics are remarkable as well, he says. “In a place like Segerstrom Concert Hall, when a listener sits in the back row and you’re playing as soft as you can, it’s crystal clear.”

Kim is playing the violin on indefinite loan from a friend, a Korean-American financier he met on a plane to Hong Kong (where Kim also served as concertmaster). Over the years, the two of them never talked about money, but one day the friend confided that he was thinking of investing in an airplane of his own. Kim convinced him that his money might be better spent investing in a violin, and the friend ended up buying a Bergonzi first, and then the Dushkin Stradivarius.

Kim started playing the violin at age 4, but soon cut his third finger in a gate (he still has the scar), and had to wait until 5 to get going in earnest. He has had a number of illustrious teachers through the years, including Peter Oundjian, Jaime Laredo and Aaron Rosand, and studied at the Curtis Institute of Music and the Yale School of Music.

Two lesser-known teachers hold a special place for him. One was Victor Danchenko at the Royal Conservatory, who Kim started with when he was 7. Kim says that he remembers “crying at every lesson for about two years” — Danchenko didn’t ordinarily teach students so young, and didn’t handle it so well — but that “Mr. Danchenko taught me to play violin.”

Another influential teacher was Paul Kantor, who Kim worked with briefly at the Aspen Music Festival. “At Aspen I joked with Mr. Kantor, I said, ‘Hey, Boston Symphony has four section openings and Tucson concertmaster is open, what do you think?’ I was totally joking. And he said, ‘Of course Tucson,’ without hesitation.”

It took the young violinist a while to get his mind around the proposition, the disparity in pay being so great between the Boston Symphony section player (high) and first violin in Tucson (low). But Kim did eventually go the concertmaster route, climbing steadily up the ladder as he went.

As concertmaster, he characterizes the work he wants to do to improve Pacific Symphony’s playing as “baby steps.”

“So, my first responsibility is my section,” he said. “I would love my section to play as well as we can as a group, to be in the same part of the bow, to use the same kind of vibrato, to have a similar kind of sound, to have a homogeneous sound, within the first violin section. And then as the violins, and then as the strings and then as an orchestra. But that’s my first goal, to have our section be on the same page with all those little technical details.“

“Then, the principals getting together and trying to have the same philosophy on sound. I know Carl has a very specific idea on the kind of sound he wants. This kind of dark, German, Central European sound instead of just loud and just flashy. So that’s something that he’s asked me to work on, and trusts me in trying to create. I think that Carl and I are kind of on the same page, so if I can try to relay that to the other musicians, starting from the first violins, but then moving into the strings and then full orchestra, that’s my goal initially.” 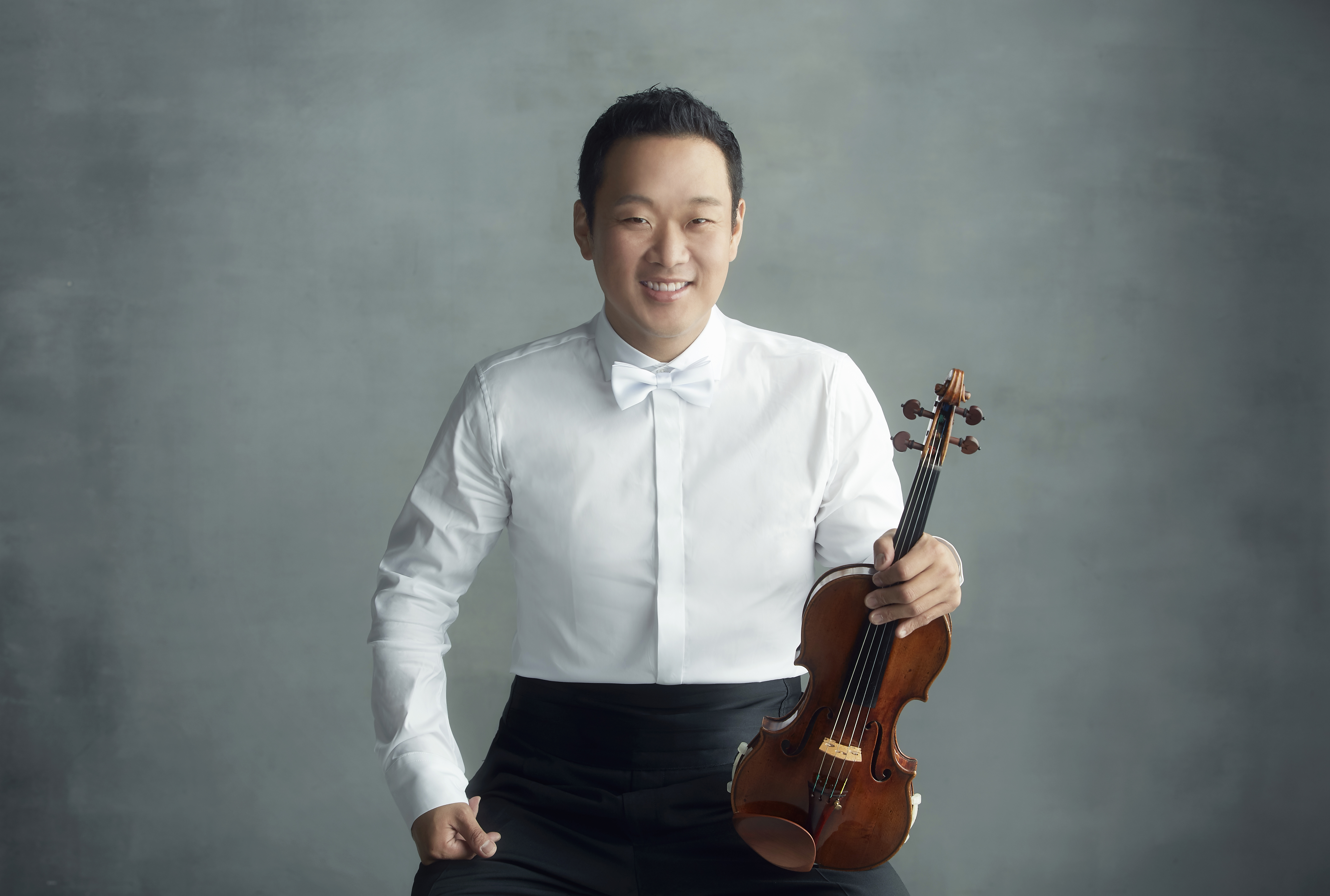 Kim says he’d like to get the orchestra better known across our diverse population, and thinks he’d like to start by perhaps playing in local Korean churches. He’s also ready and willing to participate in the Symphony’s social media efforts and to meet with donors.

A concertmaster often gets the chance to solo with the orchestra once or twice a season. (This year Kim will be featured in Mozart’s Sinfonia Concertante and Rimsky-Korsakov’s “Scheherazade.”) When asked which concertos he’d like to play with the orchestra in the future his answer was surprising.

“We have so many great soloists and that’s what they do for a living — play the Tchaikovskys, and the Sibeliuses and the Beethovens,” he said. “I can play those, but those people can play them better.”

So what he’d like to do is play concertos by living composers: Jukka Tienssu and Esa-Pekka Salonen (both Finnish) and Philip Glass and Sheridan Seyfried (both Americans), among others. He is quick to say that he doesn’t want to scare anyone away. He wants to play music that people will like. In the six years he was in Finland, he says, he saw only one standing ovation from its generally reserved audiences, and that was when he played the Seyfried concerto.

“I guarantee you if we play it here that the audience will fall in love with this piece.”