I finally got laser tagged in Beijing.

All I was doing was trying to get a photograph of bassoonist Andy Klein, on crutches, being helped off the stage of the National Center for the Performing Arts there on Tuesday. It was right after Pacific Symphony’s performance of “Daphnis and Chloe,” which opened the concert. Some other Symphony musicians had come to Andy’s aid, as he struggled to get off the riser and into the wings. The audience sat in silence watching. No music was being played. Sitting in the balcony, I raised my smart phone to get a snap (I am a reporter, after all), and, presto, the red scribble of a laser pen flashed on my screen. That’s Chinese for “Oh no you don’t.” The usher who immediately came to my seat told me as much, in the nicest possible way.

So, we don’t have a shot of Andy coming off stage. We do know, though, that Andy fell on the uneven pavement at the Forbidden City earlier that day, wrenched his knee and had to be taken to the hospital. His first concern, apparently, was making it to the concert that night.

There was some bad luck going around in Beijing. Clarinetist Joshua Ranz had also landed in the hospital with a serious case of food poisoning. (Tour physician Dr. Larry Snyder took him there.) Josh, who later told me it was the worst and most epic case of food poisoning he had ever had, was unable to play the concert. (Taylor Marino and Peter Nevin stepped in at the last minute to cover Josh’s parts on E-flat clarinet and bass clarinet.) He wasn’t certain what had caused him to get sick, though he had his suspicions. (And it wasn’t fried scorpion, which another musician tried from a street vendor.)

What’s more, one of the tour busses, loaded with musicians, broke down in traffic on the way to the NCPA that night. We were in a convoy, luckily, so the musicians quickly scampered onto the other busses.

They call the NCPA “The Giant Egg” and you can see why. The building is enormous and inside it includes more than one performance space, shops, galleries, eateries, etc. 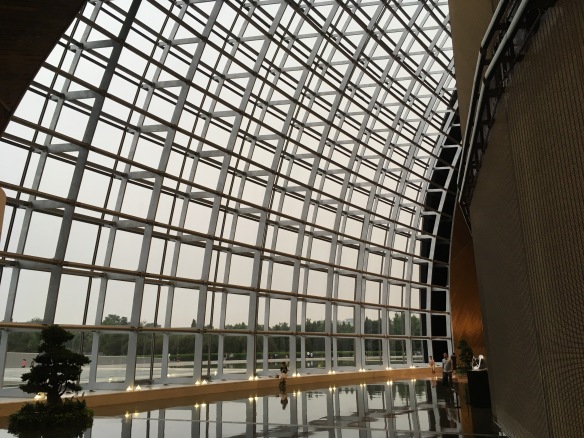 The orchestra had a sound check in the hall. The concert would be recorded and broadcast. Eileen Jeanette made some announcements, perhaps the most important being that those members of “Group C” who would be going to the Great Wall in the morning had to have their luggage down to the busses by 6:45 a.m.

St.Clair just ran a little bit of “Daphnis” and left it at that. He thanked the orchestra for a wonderful tour — this was the last concert — and dismissed the musicians early. 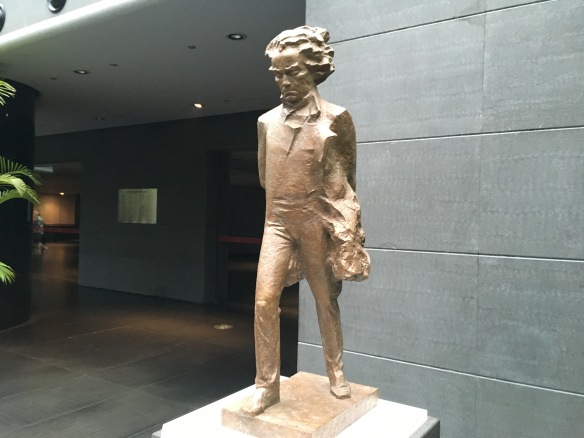 Beethoven statue in lobby of NCPA

Beijing’s audience was the best and probably the biggest of the tour, and it inspired the orchestra. Rather than warm slowly, as previously on tour, this audience was excited right off, greeting the performance of “Daphnis” with (deserved) healthy cheers, and roaring for flutist Ben Smolen when he got his solo bow.

Pinchas Zukerkman and the orchestra then made magic with Mozart’s Violin Concerto No. 3, putting “Pinky” into a very good mood. He did two things I’ve never seen a soloist do before. After a beautiful performance of the aria-like second movement, he shuffled his feet, quickly and briefly, a universal tribute in the orchestral world for a job well done. The shuffle was directed at the orchestra.

In the dance-inflected finale, Zukerman did some dancing of his own, turning to play with the orchestra in the process. He was having fun. He played his encore, the Theme from “Schindler’s List,” and the audience demanded more. It kept bringing him out for bows. Finally, Zukerman came out and ordered, “sing along,” and played an impromptu rendition of Brahms’s “Lullaby” for the orchestra. During this encore, he encouraged his choir with a “very good!” and gave them a bravo at the end.

After his performance every night, Zukerman received a big bouquet of flowers on stage. He gave them away to a different musician each time, while the audience watched. This night the bouquet went to violinist Christine Frank.

“Pictures at an Exhibition” had its best performance of the tour to end the concert. Carl St.Clair prefaced the first encore with a couple words in Chinese (basically asking if they’d like to hear one more; they did) and then the Chinese encore, “My China,” for the last time, again received ecstatically. A young cellist asked to speak with me afterwards and told me the story of the encore, which no one on tour had really quite seemed to know. It’s from a classic and patriotic Chinese film. Oooooh!

The only thing that remained was the after party back at the hotel, and that went late, of course. Musicians do know how to party.

The day, warm and muggy, had started for many of the musicians — and the rest of China, it seemed — with the requisite visit to the Forbidden City.

To read more of my coverage of Pacific Symphony’s China tour click here and scroll.

5 thoughts on “Tuesday in Beijing”