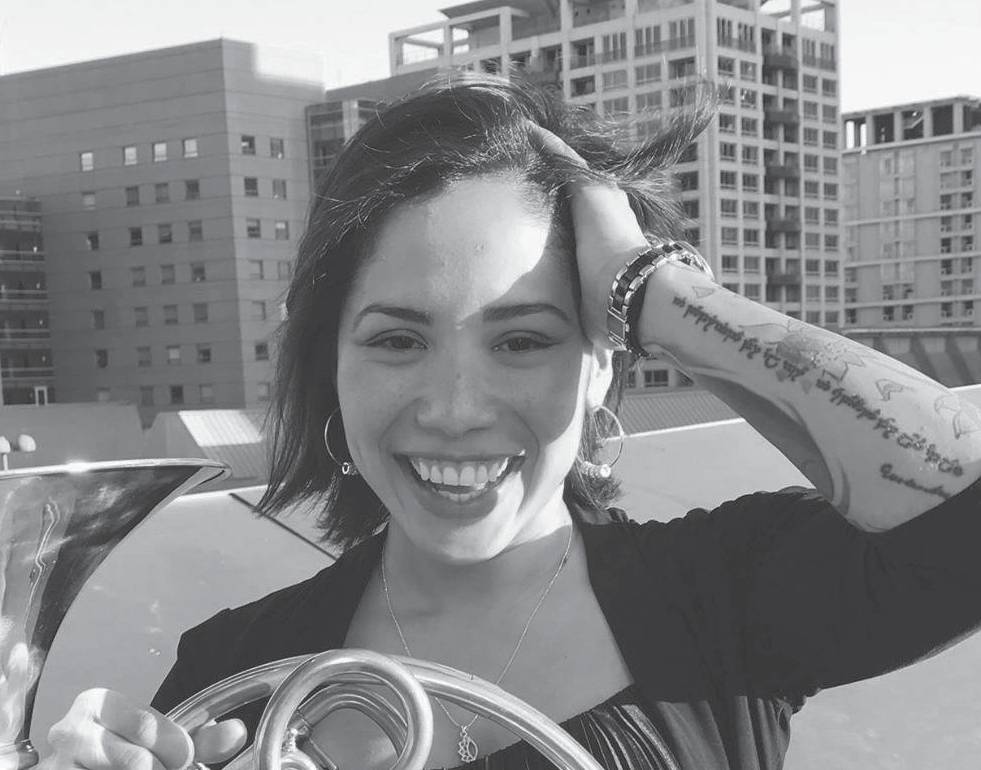 After finishing runner-up at her previous audition, Kaylet Torrez, the newest member of Pacific Symphony, knew she had to win the next one. It had become her dream ever since her move to Los Angeles. With renewed focused on her practice regime, she was able to get through six intense rounds of challenging orchestral excerpts and she was hired in November as the Symphony’s Assistant Principal French horn.

She realized that now with Pacific Symphony she can continue developing her skills as a musician, something she had always had the passion for while starting off as a young musician. “I want to get better at the horn, I want to be the best that I can for the orchestra. I want to do my best, that’s my main goal,” she said on a recent weekday afternoon, sitting in a coffee shop in her Los Angeles school.

While growing up in Caracas, Venezuela, Torrez began her music career in the acclaimed music education program, El Sistema (“The System”). Coming from a musical family with a sister who also played the French horn, she said music has always been the center of her life. She even remembers reading musical notation before anything else.

“I started music when I was 3,” she said. “I used to read music actually before I read normal letters.”

Born in 1990, Torrez said she originally started on the trumpet. However, she changed instruments at age 7 due to her teacher’s criticism.

“She told me that I couldn’t play the trumpet so I just switched.” she said. “So that’s why I play the horn, but then of course, I started to love it.”

Only her classmates knew about the switch. Torrez kept it quiet from her mother until the two of them went to an audition three weeks later.

“I had an audition for this scholarship for school and when she took me to the audition, I was like, ‘I play horn. I don’t play trumpet anymore,’” she laughed while recalling her mother’s disbelief. “I said, ‘Yes, just give me a horn, I will play horn.’”

Because of the French horn, Torrez was able to participate in El Sistema for ten years with the Simón Bolívar Symphony Orchestra of Venezuela under the direction of Gustavo Dudamel. With the orchestra, Torrez went on several tours around the world, starting when she was only ten years old.

Though she said she was living her dream with the Simón Bolívar Symphony, she began to feel unsafe in her home country with the escalating political unrest. She made the decision to move to Colombia after winning the principal French horn position in the National Symphony Orchestra there.

“I was living my dream.  I was very young, just playing in the best halls, with the best orchestra.” she said of her time with the Simón Bolívar.  “I decided I just had to move somewhere, no matter what place, I had to move and I realized it was better for my security.”

She stayed with the National Symphony Orchestra of Colombia only for one year, ultimately wanting to continue her growth as a musician. She sent emails to conductors and teachers that she knew. Eventually, in 2015, Andrew Bain, Torrez’s current French horn teacher at the Colburn School, handed her a spot at the institution, where she is currently studying to receive her Artist Diploma.

“He said, ‘Oh actually you wrote me in the right moment because I have a spot for you if you want to come.’ I didn’t do an audition, I didn’t do anything and he offered me all of this,” Torrez said. “I was like, ‘Ok, I am just going to go somewhere else,’ because I felt like I was kind of stuck in Colombia. That was not my dream.”

Between classes, exams and practicing for both Pacific Symphony and Colburn, Torrez, like any other student attending school and working, finds it difficult to manage her time. But for her she said it’s possible because of her strong desire to perform with Pacific Symphony.

“So to do all the exams here… it is kind of hard because you have to practice the horn, you have to go to the job and you have practice for midterms or theory class — so it’s very challenging to do.” she said. “I don’t think it’s impossible to do it. The most important thing for me is the job.”

Regardless of the volumes of experience she had with not only the Simón Bolívar Symphony but also the recent ones while touring with the YOA Orchestra of the Americas in 2016 and the Pacific Music Festival in 2017, the professional atmosphere Pacific Symphony provides for a younger musician, is what Torrez values most in her current position.

Welcome! Live Music is Back!

Listen to this: ‘Bolero’