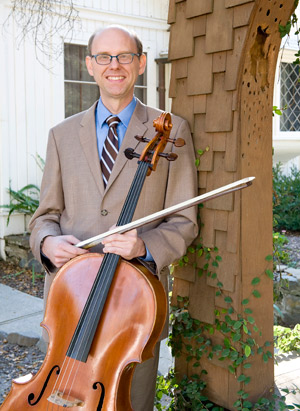 Like many of Pacific Symphony’s musicians, cellist Bob Vos is married (to Vivian, a pianist) and has a child (a 3-year-old boy, Wesley). And while many musicians in the orchestra have additional music gigs, Bob is a bit unique; so far as he knows, he is the only one who also has a non-music job. And he’s not just flinging newspapers in the morning—Bob is an assistant professor of Spatial Sciences at USC. And, yes, there is only one of him handling all of this (although he does have a twin brother).

“I work mostly on issues of environmental sustainability,” he explains. “So, I have to balance that with my music. Fortunately, the schedule at USC is pretty flexible and I just work a lot of late nights at my home office—after Wesley has gone to bed. I’m gone many weeknights and weekends, so I try to make up for it by sneaking away to the park in the afternoon with him!”

The music part is easy to figure. Both of Bob’s parents were musicologists (PhDs in music history and theory). His father played piano, organ and harpsichord, and was the associate dean at DePaul University’s School of Music. His mother sang and played flute, and founded a youth orchestra and community music school. With music running rampant in his DNA, it’s no wonder Bob became a musician. At age 4, he started cello. He says: “One might think this means I didn’t choose the cello, but I remember making a conscious choice. My twin brother was already playing violin, but I didn’t take to it when my parents tried to start me on it when I was 2!”

So, one night, there was a cello solo on the radio—“The Swan,” Bob thinks—and his dad suggested he might want to try the cello. “I loved the sound so I jumped at the chance.” What sealed the deal was a new cello professor at his dad’s university. She’d been a student at Juilliard with the very famous cello soloist and teacher, Leonard Rose. Bob had the opportunity to study with her from the age 4 to 18. “During that time, she was one of a few people really innovating the Suzuki cello method,” he says.

But Bob had more than just music on his mind when he headed to USC as a freshman in 1988. “I knew two things for sure,” he says, “that I wanted to be a cello performance major and also do a liberal arts degree—a double major. I couldn’t imagine going without the cello at the highest level possible, but I also had deep academic interests. Frankly, I also imbibed a bit of economic anxiety from my parents, who—ironically perhaps, since they were both involved in music—worried about my ability to make a living as a cellist.”

But why spatial sciences? Well, Bob was born the year of the first Earth Day, and says: “I guess I’ve always appreciated the importance of biological conservation for its own sake and the huge role of a clean and green environment in public health. I was in the Boy Scouts as I was growing up, and I had lots of opportunities to hike and camp in some very spectacular wilderness areas. This certainly fed my passion for these issues.” So, he was “very interested in—and concerned about!”—the environment in terms of pollution and natural resource conservation when he convinced his USC faculty adviser to allow him to shape his studies in that direction. Eventually, he applied for the doctoral program in political science.

As for his musical pursuits—after a stint with the New World Symphony in Miami, Bob returned to California and auditioned for Pacific Symphony’s substitute list. He then won a position with Opera Pacific in 1999, and secured a permanent spot with Pacific Symphony in 2003. Add to that his job at USC and you have a full plate—maybe two. He says: “I don’t do a lot of research nowadays because I have a 100 percent teaching load. I teach at all three levels of our degree programs and I am the director of graduate studies.” Remarkably, his two very diverse careers seem to actually work well together.

“Most of my time as a cellist is spent alone in a practice room; the orchestra rehearsal is just the tip of the iceberg,” he says. “It’s the same way for the academic work. Even though I work on multidisciplinary teams, at the end of the day, I have to get to my desk and figure things out. With the exception of time in class and on stage, nobody tells me how to organize my time, but if I don’t organize it very carefully things would quickly come to grief. Arriving for rehearsal unprepared or standing in front of a class of 120 eager undergraduates without solid preparation are both recipes for disaster!”

Bob’s best ideas for his teaching job actually come to him while he’s practicing his cello. “I probably shouldn’t admit that my mind wanders that much, but it’s often been that way for me! Conversely, after a good practice session, I arrive more relaxed for my academic work. And, my ability to analyze technical issues in my own cello playing are enhanced because I’ve worked my brain in a very analytical mode during my academic work. It’s maybe a left-brain, right-brain sort of thing where the two pursuits balance it out.” Or maybe it’s because before, after and in between, there’s Wesley. And, with luck, a walk in the park!

Haydn: Symphony No. 22 in E flat, ‘The Philosopher’