Awhile back I commented on music critic Scott Cantrell’s non-use of the word “crescendo,” his contention being that the word is too technical for a general circulation newspaper. I disagreed, asserting that it’s a perfectly good word, found in Webster’s no less, and an easy concept to understand.

Along comes Kingsley Amis. In his “The King’s English: A Guide to Modern Usage,” he has this typically curmudgeonly thing to say on the word “crescendo”:

“Once a musical term meaning ‘(passage played) with increasing volume’ and a derived figurative term meaning ‘progress towards a climax.’ For many years now taken to be a fancy synonym for ‘climax’ as in ‘the gunfire reached a crescendo’ or ‘the chorus of vilification rose to a crescendo’ and rendered useable only by the unwary or vulgar. Outside of a strictly musical context, that is.”

Yes. The important distinction to remember is that a crescendo is not a particular point in a musical composition, but a process therein, i.e. a process of getting louder. The musical marking for it is quite simple and illustrative, consisting of an elongated “lesser than” sign (as used in mathematics) placed directly under the passage for which the composer wants a gradual (or fairly sudden, but never instantaneous) increase in volume. A crescendo sign varies in length, depending upon the length of the crescendo desired.

END_OF_DOCUMENT_TOKEN_TO_BE_REPLACED

Shostakovich composed his Festive Overture for full symphony orchestra, of course, and that’s the version that conductor Carl St.Clair and Pacific Symphony will perform at the annual Tchaikovsky Spectacular on Sept. 8. Meanwhile, here’s another version, amusing but impressive all the same, performed entirely on ocarinas by Jordan Moore, a student at the Eastman School of Music. –TM

The ocarinas used are:

Another Bernstein rarity, this one written for the inaugural season of Mstislav Rostropovich (Slava) as music director of the National Symphony Orchestra in Washington, D.C. There’s a nifty part for electric guitar partway through, and a taped sequence of political speeches (sometimes cut, though not here).

Rostropovich was of course a political figure, dubbed a dissident by the Soviets after he came to the United States. His appointment as music director of our national orchestra was a nice thumb on the nose gesture by us. Bernstein had been instrumental in getting Slava and his wife, soprano Galina Vishnevskaya, out of the Soviet Union.

It’s a wonderfully whacky piece that seems to capture some of the atmosphere of political Washington, even to this day. In its way, this overture is kind of a musical equivalent of a satirical essay by H.L. Mencken.

Emmanuel Chabrier (1841-1894) is pretty much forgotten today, a one-hit wonder to most audiences, his “España” the only piece of his they’ve ever heard. There’s much more to the French composer though. He left a rich supply of orchestral music, songs, piano music and operas, much of it in a rhythmically energetic, harmonically vibrant, proto-Impressionistic style, admired by the likes of Ravel, who orchestrated his “Menuet Pompeux,” Poulenc, who wrote a book about Chabrier, Stravinsky and Satie. (An interesting aside: Chabrier owned a collection of paintings by Impressionists such as Manet —  “Un bar aux Folies Bergère,” no less — Monet, Cezanne and Renoir.) Here is my selection of some of his orchestral and piano music. At the end I have included my favorite recording of the incomparable “España,” which Gustav Mahler once called “the beginnings of modern music.” –TM

END_OF_DOCUMENT_TOKEN_TO_BE_REPLACED

Since you liked the last one so much, we thought we’d share another. Here’s Otto Klemperer conducting the New Philharmonia Orchestra in Mozart’s Overture to “Cosi fan tutte.” This was recorded in 1971, late in Klemperer’s life. The ensemble is not the tightest, but the tempos are beautifully chosen and the woodwinds wonderfully highlighted.

It’s Friday, time for some Rossini. Here’s the Overture to “L’Italiana in Algeri.” Carlo Maria Giulini conducts the Orchestra of the Teatro alla Scala di Milano. From 1954.

It’s Friday, time for another Rossini overture. Carlo Maria Giulini conducts the Philharmonia Orchestra in the Overture to “Semiramide.” 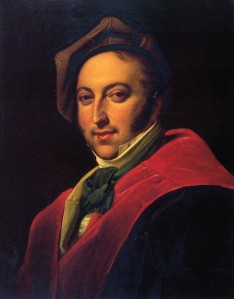 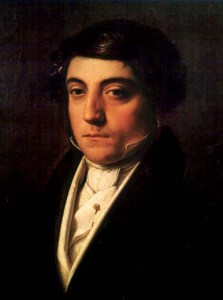 Is it just me, or do you hardly ever hear Rossini overtures in concerts anymore?

At any rate, here’s a good one, the Overture to “Cenerentola” (“Cinderella), performed by the Philharmonia Orchestra and conducted by Carlo Maria Giulini.

The portrait to the right is of Rossini c. 1815, a year or two before “Cenerentola” had its premiere in early 1817. It was painted by Vincenzo Camuccini and resides in the Museo del Teatro alla Scala in Milan. Rossini was born in 1792, so he is in his mid 20s here.

Viet Cuong Marches to His Own Unusual Drummer