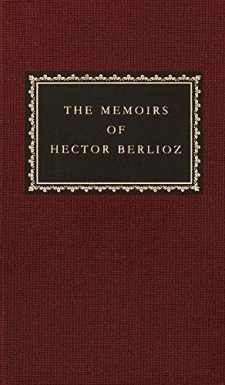 “The Memoirs of Hector Berlioz” by Hector Berlioz. Berlioz was the archetypical Romantic — sensitive, poetic, experimental, nostalgic, given to flights of fantasy, easily wounded, progressive, dramatic verging on melo-. He was also a terrific writer. In addition to the adventurous and colorful narrative — which includes his bewitchment with the Shakespearean actress Harriet Smithson, for whom he wrote the Symphonie fantastique, their marriage and not so eventual separation — and entertaining bouts of score settling, there are deep insights into the music. This must surely be one of the greatest autobiographies written by an artist.

I had been greatly struck by certain episodes in the life of Benvenuto Cellini. I had the misfortune to believe they would make an interesting and dramatic subject for an opera, and I asked Léon de Wailly and Auguste Barbier — the powerful poet of the Iambes — to write a libretto around them.

The result, according to even our mutual friends, lacked the essential ingredients of what is known as a well-made drama, but I liked it, and I still do not see in what way it is worse than many that are performed daily. The then director of the Opéra, Duponchel, regarded me as a kind of lunatic whose music was a conglomeration of absurdities, beyond human redemption; but in order to keep in with the Journal des débats he consented to listen to a reading of the libretto of Benvenuto, and appeared to like it, for he went about saying that he was putting on the opera not because of the music, which he knew would be preposterous, but because of the book, which he found charming.

Accordingly he had it put into rehearsal. I shall never forget the horror of those three months. The indifference, the distaste manifested by most of the singers (who were already convinced that it would be a fiasco); Habeneck’s ill-humour, and the vague rumours that went around the theatre; the crass objections raised by that whole crowd of illiterates to certain turns of phrase in a libretto so different in style from the empty, mechanical rhyming style of the Scribe school — all this was eloquent of an atmosphere of general hostility against which I was powerless, but which I had to pretend not to notice.

END_OF_DOCUMENT_TOKEN_TO_BE_REPLACED

A playlist of orchestral scherzos that I like. It might also make a good concert program, though you’d probably need to lose one or two.

END_OF_DOCUMENT_TOKEN_TO_BE_REPLACED

“Soundscapes” Takes You On A Musical European Vacation

And the Academy Award Goes to … Barry Perkins!