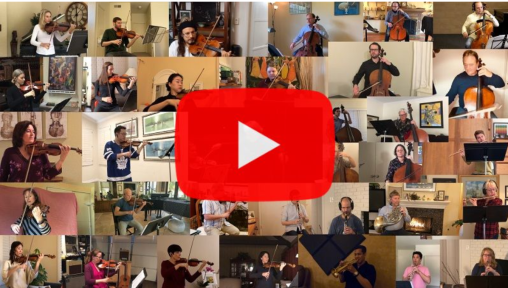 Typically, performing a Beethoven symphony can be challenging. The music is big, bold and explosive, and it requires a ton of coordination. Thanks to 21st century technology, we were able to take some of those same elements through the homes of over 30 different Pacific Symphony musicians and the final product … well, let’s just say it’s glorious.

Even though we’re not together in the concert hall, we’re still coming up with creative ways to bring you Pacific Symphony into your home. Please enjoy this “quarantine” rendition of the finale to Beethoven’s jubilant Seventh Symphony!

With the celebration of Carl’s 30th anniversary this season, we were going enjoy something very special this week: the opening of Verdi’s “Otello” in a new production. This opera is one of Verdi’s crowning achievements, and I thought you might want to watch a fully-staged production with English subtitles.

It’s hard to imagine the power that would have been stirred up in our great concert hall with an electrifying performance of Pacific Symphony, Pacific Chorale and a stellar array of soloists. So, we continue to shed some tears for what might have been, but we know that this great score lives on, and we will get back to it!

To better understand the context of the opera, you might want to watch this terrific preview from the Royal Opera House:

Here is the complete production with English subtitles included:

Evansville Philharmonic Orchestra (EPO) announced today that they have named Roger Kalia as music director of the 87-year-old orchestra. EPO, the largest orchestra in Indiana and the tri-state area, held their official press conference on the virtual platform, Zoom, to make the announcement.

Taking this position means that at the end of this season, Kalia is stepping down from his position as music director of Pacific Symphony Youth Orchestra (PYSO) that he has held for the last 5 years. Kalia simultaneously held the associate conductor role at Pacific Symphony, and was the assistant conductor for three and a half years before that. We are as sad to see him go as we are happy for his wonderful opportunity. His long tenure with Pacific Symphony has been the greatest experience and we are confident in him and his next venture.

“I am honored to be named music director of the Evansville Philharmonic Orchestra,” Kalia said of the new appointment. “This is an innovative and passionate organization with deep roots in the community, and I look forward to being a part of the meaningful, collaborative community connections the EPO offers through its concerts, outreach and family, youth and education offerings. The 2020-21 season promises to be exciting and engaging, and I cannot wait to share this music with you in the concert hall beginning this fall.”

Keep tabs on Kalia by visiting http://www.rogerkalia.com, or by saying hi to him if you find yourself in Indiana. Best wishes, Roger Kalia!

Locked-down in Long Beach? No problem!