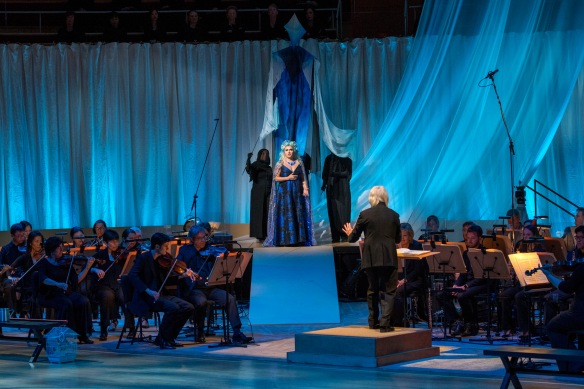 Opera seems analogous to a bumblebee: it’s an anatomical impossibility that somehow shouldn’t fly, and yet it does. English satirist Terry Pratchett once quipped: “Opera happens because a large number of things amazingly fail to go wrong.” And, indeed, when things miraculously fail to go wrong, opera is an astonishing art form.

Opera in Orange County has experienced glory days and lean times. Many Orange County opera lovers have treasured memories of Opera Pacific, which operated for 22 critically celebrated seasons. That company could trace its roots to 1962 and the annual Festival of Opera Association in Laguna Beach, which performed opera in English. In the early 1980s, the Opera Festival members and opera aficionados became the core audience when Opera Pacific was incorporated and in 1988 began presenting at Segerstrom Center for the Arts, eventually becoming one of four resident companies. In its heyday, Opera Pacific staged six productions a year, but in its final years the season consisted of only three productions under its artistic and music director, John DeMain.

Opera Pacific became a casualty of the economic collapse in 2008, and the audience felt the loss deeply. Once it became clear there was no way the company could make a comeback, Pacific Symphony in 2010 convened a town meeting of local opera leaders and supporters to explore how to revive opera in Orange County.

The mastermind behind the effort to bring opera back after the unfortunate demise of Opera Pacific was Maestro Carl St.Clair, who celebrates his 30th anniversary as Music Director with Pacific Symphony this season. St.Clair’s stellar reputation as an opera conductor in Europe set the ideal stage for such a venture. St.Clair had concluded his tenure as general music director and chief conductor of the German National Theater and Staatskapelle (GNTS) in Weimar, Germany, where he had led Wagner’s “Ring Cycle” to great critical acclaim. St.Clair was the first non–European to hold his position at the GNTS, and he also had served as general music director of the Komische Oper Berlin.

Our 2019 production of Puccini’s “Madame Butterfly”

By 2011, St.Clair and Pacific Symphony had decided to experiment with a three-year plan to test the audience appeal of operas that are semi-staged. A semi-staged production is tailored to the concert hall with the orchestra on stage instead of in the pit. Scenes are evoked with partial sets—enhanced with lighting, projections, and video—rather than represented with fully designed sets. Singers are costumed and perform in character. This engenders a deeper intensity between performers and audience, creating heightened dramatic impact and compelling performances. Previously, audiences have been faced with two extremes: bare-bones concert opera where the singers stand and sing as soloists in front of the orchestra or an extravagant full opera house production. Marc A. Scorca, president and chief executive of Opera America, calls semi-staged opera “a flowering of the space in between those two points.”

The Symphony’s opera-vocal initiative offered a “prelude” with two semi-staged performances of “Hansel and Gretel,” adapted for children, as part of the Family Musical Mornings series in early 2012. Later that season, “La Bohème” was presented on the main stage, the Symphony’s first full opera production met with lavish praise from critics and audiences alike. Two of the three performances of the Puccini favorite sold out, confirming there was a strong appetite for opera in Orange County.

St.Clair feels that “opera is now part of Pacific Symphony’s DNA.” The Symphony is a gifted and versatile ensemble that has evolved into a sensitive opera orchestra under St.Clair’s masterful leadership. In addition, the Symphony’s commitment to artistic collaborations have expanded the roles of Pacific Chorale and Southern California Children’s Chorus through the opera-vocal initiative.

Since the initial launch of the opera-vocal initiative, presentations have included Tosca (2013); La Traviata (2014); Carmen (2015); Turandot (2016); Aida (2017); The Magic Flute (2018); Madame Butterfly, L’Enfant et les Sortilèges, and The Music Man (2019). Similar to last season, this year boasts three great vocal masterworks: Carl Orff’s magnificent cantata, Carmina Burana, for vocal soloists, orchestra and chorus on opening weekend; Verdi’s Otello; and Mahler’s monumental “Symphony of a Thousand” as a grand finale to a grand season. And each season has featured an Opera for Kids production: this year Donizetti’s Elixir of Love will be presented.

With three productions last season, and three again this year, Pacific Symphony’s Opera-Vocal Initiative has grown into a festival of sorts. Opera-lovers can feel at home at the Symphony. In addition to memorable local performances, members of Pacific Symphony’s Opera Focus group travel on outings to enjoy the art form at Los Angeles Opera and San Diego Opera, as well as attend Metropolitan Opera Live in HD cinema broadcasts in local movie theatres.

Thanks to Carl St.Clair’s vision and the boundless energy of enthusiastic volunteers and supporters, opera is not only once again a part of Orange County’s “musical DNA,” but it’s clearly a significant part of its cultural future.

Carl Tanner, who is joining us for “Otello” this season

From trucker, to gun-toting bounty hunter, to world-class tenor, Carl Tanner’s backstory reads a movie script. In fact, the script is already written and actor Michael Keaton will direct the biopic. Tanner has had an interesting past and an even more exciting present. As a singer, he’s always been a natural. After a neighbor heard him singing the shower, Tanner decided to try out for high school choir. He went on to Shendandoah Conservatory of Music, graduating in 1985 without any aspirations to sing professionally. After college, he got his commercial driver’s license and became a trucker. A friend got Tanner into bounty-hunting for a while where he made 172 arrests in 190 pursuits.

Fate intervened when he was driving his big rig in Washington, D.C. singing along to opera on the radio. A woman in a convertible pulled up alongside him and asked it what she heard was him or the radio. “Because if it’s you,” she said, “you’re missing your calling.” His boss had been telling him the same thing, so he decided to go to New York to try his luck. He took voice lessons and got a telemarketing job to pay for them.

During that time, he wandered into a restaurant where he had heard opera music playing. The proprietor asked Tanner if he could sing. When he did, the force of destiny struck again. Two customers in the restaurant were top administrators at Santa Fe Opera. They offered him a summer apprenticeship in Santa Fe in 1992, and the trucker-turned-tenor was on his way.

Tanner performed his first Otello at the Metropolitan Opera last season to rave reviews. And now Orange County audiences will have a chance to hear him in the Pacific Symphony production of Verdi’s great masterpiece (April 23, 25, and 28).

Written by the ever-elusive Jeanne Quill.

What’s Happening Next Month: May 2022